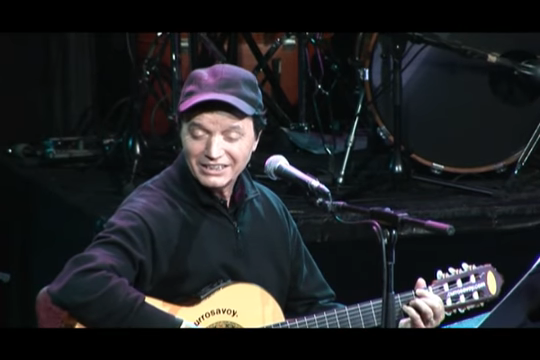 Kurt ‘Curro’ Savoy is known as the “El Rey Del Silbido” which translates to “King Of Whistles” and as “El Rey Del Rock”. He was born in Andujar, Spain, with the birth name Francisco Rodriguez. He paid tribute to the city on the 16th anniversary of his professional music career.

Kurt’s rise to fame started after he imitated the whistle of melodies from spaghetti westerns, i.e. The Good, the Bad and the Ugly. Videos of his fantastic live show have been catching the eye of people online, mainly due to his unique ability to whistle. Kurt imitates the great whistler Alessandro Alessandroni (1925 – 2017), who whistled on the original soundtracks of Sergio Leone’s movies. Below, watch Kurt Curro Savoy, the king of whistles, perform The Good The Bad, And The Ugly live!

Kurt’s unbelievable ability to whistle and hold a tune has landed him a few different career opportunities including recording on Ennio Morricone’s soundtracks and high profile advertising spots. You may remember the COCO Chanel advert with Vanesa Paradais swinging inside a birdcage in 1991, Kurt overdubbed the whistling. The advert was shown across multiple countries’ TV networks and the whistling is from the King. You can see the advert from 1991 in the video below.

In the 1960s Curro was known as “El Rey del rock” and later “Rey del whistle”. He lived in both France and Spain as a rock singer, songwriter, guitarist, and pioneer of the electric guitar in Spain.

He entered and performed on many talent TV shows such as Saturday Nights, Gran Parada, La Casa de los Martínez, Club Mediodía, Telediario which was presented by Tico Medina and in many other television programs too.

His wife is Clarita Montes a writer, journalist, singer, and the first-ever French female bullfighter. Their wedding was attended by many Spanish, French and Italian journalists.