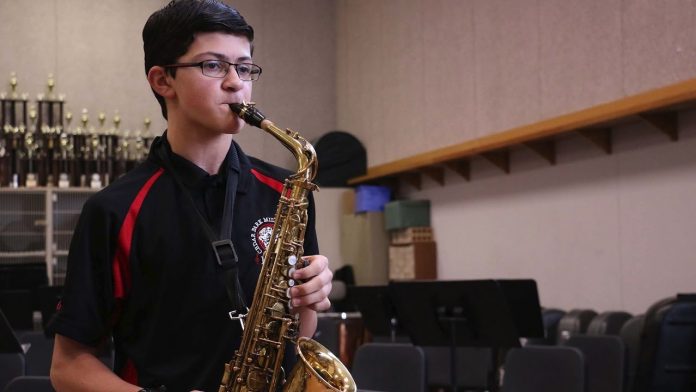 Aidan Brown is a young saxophone player whose performance of The Flight Of The Bumblebee left his bandmates stunned. Born in Cedar Park in Texas, Aidan first began learning to play the saxophone in the 6th grade when he was only 11.

He likes to say it was in honour of his grandfather, who was a jazz musician who also played saxophone. Being an honest boy, though, he later admitted, “I picked saxophone because I heard the song ‘Thrift Shop’ by Macklemore and thought the sax part was cool”.

By the time he was in 8th grade, Aidan was already an accomplished player and a part of the school band. It was at this moment he came to the attention of the internet in a spectacular fashion. During band practice, he began playing Rimsky-Korsakov’s famous orchestral piece, “Flight of the Bumblebee”.

The frantic pace of its semiquavers means even experienced pianists can come to grief, let alone attempting it on a saxophone. Aidan proved he was more than equal to the task and wowed his bandmates by playing 786 notes in a little over a minute! It would be a virtuoso performance by anyone, but considering Aidan was only 13, it was a little short of miraculous.

In order to play this piece, you first need to master circular breathing, a skill showcased by Kenny G as well as didgeridoo players. Another amazing skill for such a young man to have mastered. The video was uploaded and promptly went viral, having been viewed more than 8 million times.

Since then, Aidan has continued to work hard at his music. Although he clearly has lots of natural ability, daily practice is still required for him to grow and progress. It seems to be working. He has already performed as part of the Middle School Honors Performance Series in the prestigious Carnegie Hall.

In 2021 he will be graduating from the University of Texas at Austin, naturally, his major was in Music Performance. I think we can expect more great music from this exceptional musician. If you want to see more from this awesome musician, subscribe to his YouTube channel.