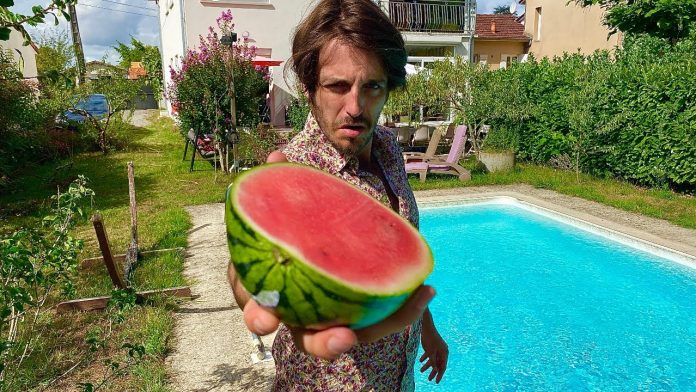 The creator of PianoBoomBoom, Mezerg has many musical skills from Piano to the Theremin which he uses brilliantly to produce great 4/4 dancefloor beats.

Using both his hands and feet to great effect. Merging acoustic and electronic music he creates his own unique and quite brilliant ‘sounds’! Quite a talent! Mezerg plays in Jazz bars and night clubs and his music could be described as somewhere in between acoustic and house music.

He played over 100 shows On his 2018 European tour from Parisian Squats (An alternative venue for Art & Music) to the Luxembourg Contemporary Art Museum playing alongside the likes of Emir Kusturica, Etienne de Crecy, and Acid Arab.

Mezerg is a pioneer of modern music technology. He is often seen playing the theremin which is the instrument creating the bass line you’re hearing in the video below. The theremin is an electronic musical instrument controlled without physical contact by the musician playing it.

He truly is a unique talent, his timing and technique are on point throughout every video performance he does. Mezerg is not only a great musician, he is one of the most creative musicians you’re likely to come across.

He has released videos of himself playing electronic instruments that have only been released weeks prior to his performance, proving how quickly he learns. Not only that, if the industry has nothing new for Mezerg to get his hands on, he will make his own incredible creations such as the Watermelon Paino in the video above!

Mezerg has also been collaborating with other well-known musicians, including Waagal, a brilliant finger-tapping style Guitarist. Their styles suit and compliment each other’s, Mezer creating the beat and Waagal on the Didgeridoo.