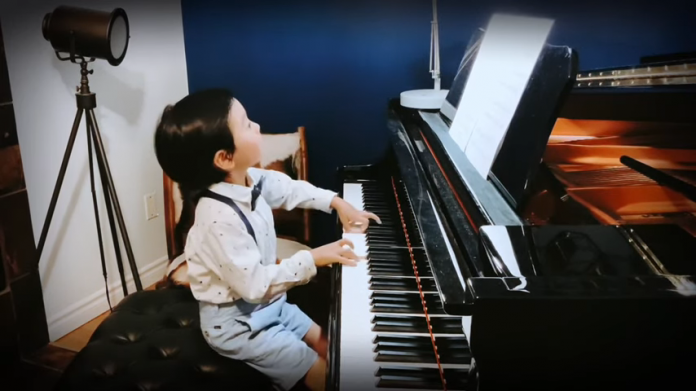 Prodigy is a word that is often applied to any gifted youngster but Lucas Mason Yao is showing the world what it truly means. When you first meet this bright, bubbly little boy he seems like any other 5-year-old. He loves to run and play and he is obsessed with the Super Mario.

He seems normal until you ask him about numbers, he can count up to one centillion, or Pi which he can recite to 500 places. It is most obvious though when he sits at a piano and begins to play. Although he has only been playing for a year Lucas plays with talent and precision well beyond his years. It seems incredible but his music career has already accomplished feats that it takes others decades to achieve.

After he came in first in an audition performance for the prestigious Crescendo International Youth Music Competition he was invited to play at the legendary Carnegie Hall in New York. He played Variations on a Russian Folksong by Isaak Berkovich with confidence and intensity. Since then Lucas has become a star on YouTube. He, or rather his mother, has published videos of him playing Chopin, Bach and a wonderful rendition of Beethoven’s Fur Elise.

You should prepare yourself to be amazed! If you’re worried that he may be growing up too fast and missing out on his childhood though let’s put those fears to rest. His channel also includes videos of him dressed as characters from Super Mario in which he plays the theme and other sound effects. It really is cuteness overload! When asked about playing the piano Lucas said

“I like to play the piano. I like to perform. I like the audience,” so I think we can expect many more stunning performances from this gifted little boy.

As well as having perfect pitch and incredible talent though Lucas is also a very thoughtful boy. The isolation of coronavirus has made life hard for many, particularly the elderly and people who live alone. Lucas felt he wanted to help to cheer people up and so decided on his own to learn to play Moon River. The performance has been posted on YouTube and proud mum Cindy Liu hopes that his warm and bubbly personality combined with his music will shed a little happiness and be a light in these dark times. Cindy explains it can be a challenge keeping him engaged. “I let him lead the way, following his natural curiosity,” she said. “We just want him to be happy.” Going forward it’s clear to see that we can expect more great things from this exceptional little boy.