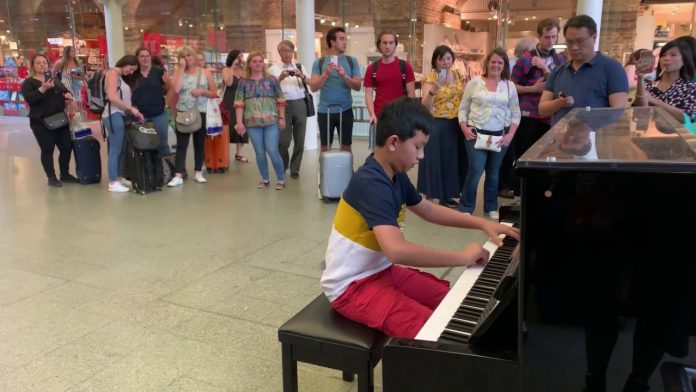 Cole Lam is an amazingly talented musician from the UK. Not only does he play the piano, but he is a multi-instrumentalist of epic skill and showmanship.

The 12-year-old was waiting in the London Street Pancras Station when he decided he would jump on a piano that was on public display at the time. When he jumped on the piano and started to work his magic.

No one could know that the young musician would play one of the most famous songs in the world to such a level that would rival some of the most experienced pianists in the music business. The young performer looked nervous as he approached the piano, clearly unsure of the crowd that had gathered around him in the busy station.

At the time he didn’t know that the piano he was playing on was in fact, the great Elton Johns, donated for a showing at the station. The young musician started to play the opening lines to “Don’t Stop Me Now” by Queen and instantly became one with the music.

To see him play you would think he is a veteran of the piano, having a long line of musical performances at his back over a decade’s long careers, however, at the ripe age of 12, Lam is one of those musicians that defy expectations and belief.

RELATED: 5-Year-Old Laughs With His Father Before Erupting Into Complex Piano Piece

The song builds into the musical chorus and the crown watch, transfixed by Lam’s uncanny musical talent. If Freddie Mercury could have been there, I’m sure he would have been proud of the amazing show put on by Lam in the busy station.

Lam is completely engrossed in the music, not looking up from his piano at any point, and seems to almost forget that there is a crowd there at all. This is unsurprising considering the complexity of the song he is paying to the eagerly listening crowd.

Lam is not just a humble pianist, but a singer, songwriter and multi-instrumentalist, with guitar and clarinet being only a couple of the singer’s playable instruments. As well as this, Lam composes his own music, which for a person of his age is a truly impressive feat of musical talent. With the right dedication and encouragement, Cole Lam could be the next big composer and performer, likely to bring in crowds in their droves.