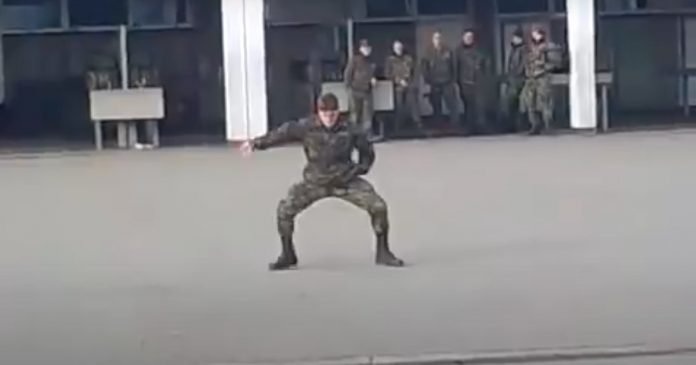 Dancing like Micheal Jackson is an impossible feat for most people, but not for this Swiss army troop. He takes the opportunity to showcase his moves in front of his colleagues in full army uniform, including boots, in the middle of military camp! Watch his awesome performance in the video below.

Being a military requires a lot of dedication, hard work, and discipline, however, every once in a while you’ll see soldiers taking a break from their exhausting duties and let loose with their personal passions.

This is exactly what happened when this soldier from Zurich, Switzerland gave his fellow soldiers a show to remember during a stay at their military camp.

This video has been watched by millions across the world not just because it’s unusual to see a soldier dancing in full army gear, but also because he absolutely nails all the classic moves from the king of pop.

Soldiers are known to take their opportunities to enjoy a little downtime, even when still in gear. In the video below you can see US army forces taking on South Korean soldiers, thankfully not in a war, but in a good old-fashioned dance-off!

Maybe this should be the future of war, dance battles in the desert, and Michael Jackson in the camp. It would serve for a lot more happiness, entertainment, and a lot less misery!