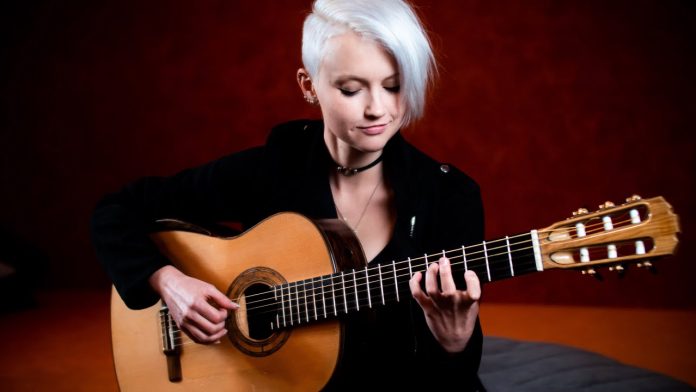 Stephanie Jones is an Australian guitarist who played an unbelievably beautiful rendition of The Sound of Silence. Stephanie’s interest in music started at a young age. Before she even started high school, she had learned to play a range of instruments which began with the piano, and took in the saxophone, violin, viola and flute until she found her true love, the guitar. Stephanie found its versatility and the captivating range of sounds it could produce very appealing.
Please SHARE this with your family and friends.

Stephanie’s mastery of the guitar continued to develop through high school and at university. During her 4 years attending the Australian National University she studied under two of Australia’s leading classical guitarists, Tim Kain and Minh Le Hoang and was awarded a first class degree with honours. Stephanie’s skill was great enough that she was awarded a Friends of the School of Music Transition Scholarship to enable her to complete a variety of projects following her graduation.

Since then Stephanie has gone from strength to strength. She was awarded two more scholarships, completed tours of Australia, New Zealand and Germany, and played in the illustrious Wigmore Hall in London. She has also released three solo albums Open Sky, Colours of Spain and Bach, the Fly, and the Microphone and won awards in a number of music competitions including, Fine Music Network Young “Virtuoso of the Year” Competition, Uppsala International Guitar Festival Competition, and first prize at the Hannabach Guitar competition. Pretty impressive for a young lady who is not yet 30!

Stephanie’s YouTube channel, which has 110,000 features some of the most beautiful and accomplished playing you could ever wish to hear. Perhaps that’s why her videos are viewed more than any other classical guitarist. In an interview in 2018 Stephanie explained that she hopes to remove some of the stigma attached to classical guitar as well as having to respond to assumptions that if she plays guitar she must be in a band:

“I guess a part of me always felt it was ‘less cool’ when I had to explain I am mainly a solo classical guitarist. There is still a bit of stigma with the classical guitar; that it is not as legitimate as other instruments. I hope that through the content I post online, I can help show just how versatile, interesting and evocative the instrument is.”

If any video will achieve that goal it is her rendition of Simon and Garfunkel’s Sound of Silence. Originally recorded as a birthday gift for her Mum, Stephanie’s video has now been watched 2.3 million times. Her mastery is evident and the arrangement is so beautiful you don’t notice the voices are not there. It’s as if she is playing them too. To experience a moment of deep serenity and utter joy check it out now.