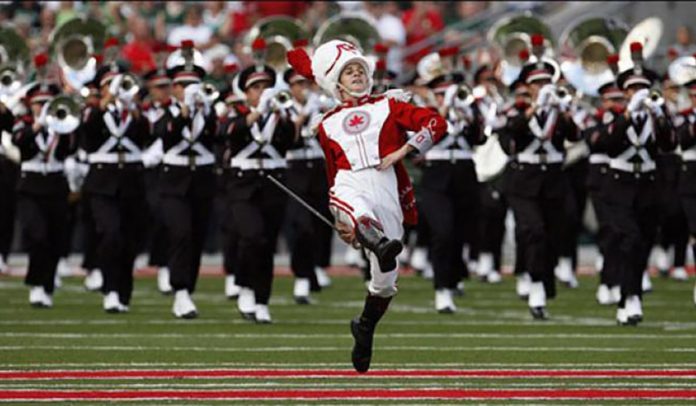 In one of the most impressive tributes to the King of Pop, watch as a marching band does a giant moonwalk. For those of you unfamiliar with college football in the USA, the attraction is not just the game.

Most teams put on amazing half-time shows featuring cheerleaders, marching bands and team mascots. Ohio State’s band, in particular, is known for putting on attention-grabbing shows and has even been nicknamed “The Best Damn Band In The Land”. High praise indeed!

The performance has drawn more attention than any other. It was a tribute they performed to the King of Pop, the late, great, Michael Jackson. It was totally “Bad”, in a good way! They wanted to celebrate this record-breaking album on its 25th anniversary.

Their show begins with the band forming the entwined letters M & J that was Michael’s logo. During this portion of the show, they pay tribute to his previous album, the incomparable Thriller.

The band then continued their display, taking in all the best-loved and most famous hits from the Bad album as well as some others, including “Bad”, “The Man In The Mirror”, and “The Way you Make Me Feel”.

The band’s expert playing accompanied by flawless choreography meant even the opposing fans from Iowa were cheering the Buckeyes on. It would have been a stellar performance without anything extra, but at around four and half minutes, the band did something that will make your jaw drop!

While they were performing “Billie Jean”, the band formed a giant figure of Michael Jackson himself, white glove and all! Accompanied by deafening cheers from the crowd, the figure the band created moonwalked across the field. It is truly a sight that has to be seen to be believed. The skill involved for so many people to move so perfectly in unison while playing their instruments is almost beyond imagination.

If you want to learn more about this incredible band, go to their official website.