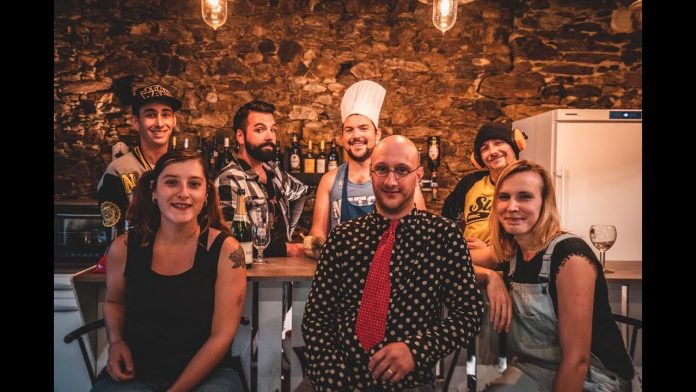 Les Fo’Plafonds are a group of musicians from France who perform with items you wouldn’t normally expect to see used as musical instruments…they make a great sound though.

Their name “Les Fo’Plafonds”, which roughly translates into “The False Ceilings”. “Fo” is a slang way of saying “faux”, which is French for false. Which means their name is as crazy as their instruments! The group consists of 7 percussionists that make incredible music when only equipped with pumps, bottles, frying pans, and sometimes even burgers? Their videos are brilliant to watch, keeping you entertained visually and musically, all the way through to the end.

Their unique performance style has gained interest throughout social media, resulting in the band growing a healthy following for their music. Many of their recent shows have sold out with fans excited to see what creative performances they have in store for them.

Their live shows are just as awesome as their videos. The band is always so creative with their instruments. In the video below they are playing pipes with flip flops. Each pipe is cut to a slightly different length which tunes the sound to produce a different note when hit with the flip flop.

Their newest show is called “Happy Culture”. The show is centered around the evolution of the percussionists since the band formed, over 10 years ago. One of the founding members, Fabrice, explained the band like to “Refrain from using conventional musical instruments and show that originality has its place in musical culture.”

Some of the amazing instruments they have created and performed with they’ve given names such as the “Pochtrophone” which is made with bottles, the “Tuborgue” and its enormous plastic pipes, and the “Contrabassine”. There are many more creations that you can see in their videos.

These percussionists are extremely creative with their instruments, their live shows, and their video performances. After watching these videos of Les Fo’Plafonds covering well-known songs with instruments you probably never even thought could be instruments, it may have got your own creative juices flowing? Maybe you could make some music with your fridge?