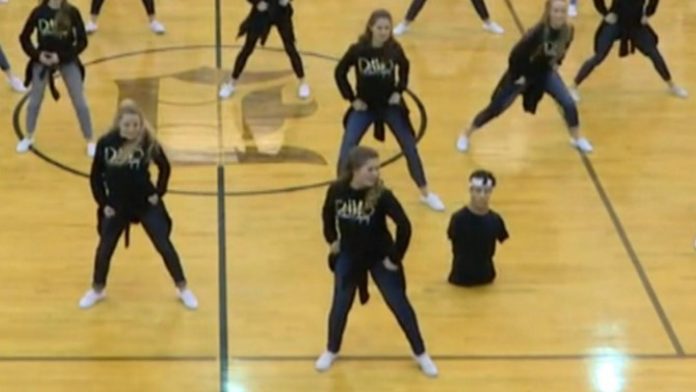 Gabe Adams is an amazing young man who became a gifted dancer despite being born with no limbs. Gabe was born in Brazil and suffered from the very rare condition Hanhart syndrome. It is a congenital disability that causes limbs to develop abnormally. In Gabe’s case, his limbs did not develop at all. Gabe’s mother gave him up for adoption when he was born as she worried she’d never be able to care for him fully.

Scroll down to watch and learn more about this inspirational man.

Luckily for Gabe, couple Janelle and Ron Adams from Utah heard about his situation. Although they already had 13 biological children, their hearts were moved by little Gabe. “We had our concerns, but I couldn’t stop thinking about the sweet little boy so far away without arms, legs or a family,” said Janelle. Soon after his birth, they travelled to Brazil to adopt him and bring him home.

Gabe gives the credit for his dancing brilliance to his parents and their support, “I wouldn’t have been able to do anything without my parents.” They gave me a chance to find out what I love.” He began learning to dance when he was twelve, and at first, he did it in secret. He choreographed and rehearsed for months to compete in his school’s talent show. Learning to dance in a 16-person household without anyone finding out is no small feat. With the determination Gabe has displayed throughout his life, he managed it and surprised his family and friends with his dance performance set to “Unfriend You” by Greyson Chance.

It was in his sophomore year at school, however where Gabe decided to try out for the school’s dance team. He saw it as a way of making friends while doing something that he loved. He was crushed when he heard two girls saying he’d probably get a spot purely because he was disabled. He ran to the dance teacher and begged her not to put him on the team if that was the reason. She immediately responded, saying, “I would not put you or anybody else on the team because I felt sorry for them, you get a spot on this team because you deserved it”.

Once Gabe was on the team, he began to showcase his amazing talents. His body was naturally suited to breakdancing, and he soon began to display his skill and energy. Check out this stunning performance from Gabe and his teammates if you ever want to be inspired by what a person can do when they follow their dreams.