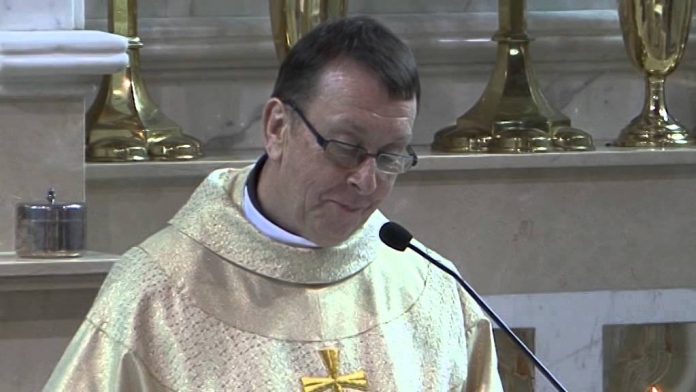 Everyone wants their wedding to be special, but Chris and Leah O’ Kane had an unforgettable ceremony when their priest sang a beautiful rendition of Hallelujah. Father Ray Kelly’s community in County Meath knows what a beautiful voice he has. In fact, he’s often asked to sing at weddings and funerals and has released three albums. All of these facts were a mystery to the bride and groom on their big day.

Father Kelly explained, ” the bride Leah is from Dublin and the groom Chris is from Cookstown in County Tyrone,” he said. “They were having their reception at a hotel about 10 miles away and chose our church.” During the rehearsal, Father Kelly made a joke about singing a song for them. The bride agreed but didn’t believe he was serious, how wrong she was.

The couple had hired the band Sunlight to provide music for the wedding. At the end of the ceremony, the band finished playing, and Father Kelly’s backing track started to play. The crowd looked at Sunlight, but all they could do was shake their heads.

No one was sure where the music was coming from. Then, to the surprise of the whole wedding, Father Kelly began to sing. The melody was that of Leonard Cohen’s classic, but the very talented priest had rewritten the lyrics to suit a married couple just starting their lives together. At the end of this beautiful performance, Father Kelly received a standing ovation.

Normally, the song would have been a special treat enjoyed only by the wedding party and their guests. Luckily for us, the ceremony was being filmed by a video company run by a local man, Patrick Rushe. He uploaded the performance and was stunned by its reception. The video received over 2.5 million views in just 4 days. If you haven’t watched it yet, take a look here. Father Kelly’s talent is a marvel that has to be seen, or rather heard, to be believed.

If you’re wondering if this is the start of a career change for this amazing clergyman, then you’ll be disappointed. When asked about the possibility, the father says, “I enjoy singing, but I wouldn’t want to do it full time – I love what I’m doing as a priest.” It looks like a trip to Ireland might be needed.